As has been well published, as of November 2nd a peace agreement between the Federal Republic of Ethiopia and the Tigray People’s Liberation Front has been brokered with the conditions of disarmament, returning to the constitutional understanding of regional relation with the federal government and so. Within Afar Region, this is greeted with tentative joy given the horrors that have taken place over the past 2 years, the utter disruption to livelihoods and the destruction of infrastructures. Indeed, it is a reversal of the aggression so many communities adjacent to the borders of Tigray and Amhara Regions in western Afar have endured repeatedly. As of writing, there is growing confidence that peace indeed in Tigray and with Tigray will become reality with excitement in Mekele, the Regional capital as prices of commodities drop daily to within country – costs and freedom of movement is restored. Moreover, there is talk of a federal reconciliation to be established between the warring factions leading up to election in Tigray. However the country continues to endure conflict in western Oromia (Wollega) and in other Oromo areas, ethnic crimes being perpetuated. Too, the Issa/ Afar conflict appears far from over although the Issa- Somali occupancy of Awash roadside towns in Afar came to an end in September, Issa having been pushed back into their adjoining Somali Region ending the decades – long contraband trade of the Issa from Djibouti and the Arab states into Ethiopia having a market base in the 3 towns now freed to Afar control. Djibouti-fired insurgency again flared in late October adjacent to Guddamyto, one of those former contraband towns causing severe casualty.

In Afar Region, all districts that were under Tigray – fired conflict are now accessible with the exception of Hidda, Tonsa and Araadu in Magaale and Gil’aaso in Aba’ala, all kebeles still claimed by TPLF occupancy. Being that Afar who had joined the TPLF maintain this presence, it is expected that there will be a resolution and again, these people will return to government control.

The trail of disaster

The trademark of this conflict has been the utter, systematic destruction of community livelihood through rendering any service infrastructure useless and destroying both the homes and the assets of the local communities (killing and driving off goats, shooting camels, looting shops and burning bee-hives). With the count on all 13 conflict – affected districts, some having endured upwards of 7 months occupation of the TPLF, around 20,000 households are now in abject poverty with no possibility of production or income generation in sight. The government is giving an overall figure of 30 billion Birr (around 6 billion USD) to rehabilitate damaged infrastructure. Conflict destroyed/ looted all health services in its path, most schools, most major water schemes, grinding mills and markets servicing northern Afar Region. So far the north has 3 ambulances, 5 partially functional health centers, a primary hospital in Barhale town converted from a health center serving around 600,000 people. Aba’ala hospital is slowly resuming functionality having been laid to ruins.  People away from roadways remain without basic services for treatment, delivering mothers, vaccination or malnutrition surveillance and treatment. Schools are yet to begin, local markets have no real source of commodities that people can afford and malnutrition in Konnaba, Magaale and Erebti is around 42% among pregnant and breast-feeding mothers and 35% among under 5 year olds.

What are hurting communities most?

The way to recovery

The need for emergency/ informal learning

An estimated 65% of all Afar school children are yet to join the new school year starting as of later September. They have been in displacement; the school they were learning in is still unsafe to accept students, they live in a traumatized society that can hardly put education into the jigsaw. Informal learning for them, for youth and mothers is so much needed as a stabilizing factor. This includes a variety of teaching aids, innovative learning and lots of different easy – to read books of stories and positive ideas.

The role of women extension workers

APDA ’invented’ women extension workers as part of the community-based development team in 2000. Then implementing with an all – male team the organization was grappling with dealing with the issues of maternal health, the harmful affects of certain traditional practices on reproductive health and wellbeing, that females almost had no role to play in their own development bound to the house to bring up children. Thus the organization first taught 36 women to read, write calculate in Afar language, selecting 20 of these students to be the launch of the ongoing program throughout APDA’s implementing districts wherein women based in the community are trained in all skills needed for the betterment of female life including working through issues such as gender-based violence, the affects of female genital mutilation (FGM), early marriage, limited education opportunity as well as none to limited maternal health services. These women are thereby capable of counseling women and girls threatened or subject to abuse, working with all aspects of health promotion/ disease prevention, homecare of the pregnant and delivering mother as well as promoting female involvement in income generation. More or less social workers as is known in the west, these women are ideal and able to work through the issues of conflict trauma enabling affected women and girls to recover to productive, dignified living. APDA is deploying them as much as possible and believes each and every community in the Afar society needs such a human facility. Annual refresher training and monthly reporting links them to the overall program.

Realizing that the Afar Region had to make a turn-around to confront the food insecurity inflicted through lack of supply access; market stability; transportation limitations APDA has picked up the following strategy

To generate a local economy and access to food:

For all the above, APDA needs partnership and ongoing partnership contributing to urgently pulling the society out of conflict mode into recovery, peace and reconciliation.

Part of a program to bring to localize humanitarian response

A great part of the solution to all above thoughts is that the affected community is empowered to recognize and implement the solution to their incurred shock, they the drivers/ owners/ sustainers of their own destiny.

APDA is part of a group of 5 local NGOs in a project named ‘ToGETHER’ with 7 other countries each with 5 local NGOs campaigning to change the old order of top-down driven assistance to that of community engagement and management from the outset. The German project mentored through 4 German international NGOs, took representatives to a conference in Bonn bringing together the 8 participating countries, a visit to the humanitarian section of German Foreign Affairs and to the interim Head of ECHO in the European Union in Brussels. The overall conclusion of these visits is that like climate change, where there is a will, it can happen and that German government and ECHO have a high level of interest. The reverse to local – driven implementation is as large as the objectives of the climate change seeking to address inequality bringing about directed and just assistance to those in need.

This entails APDA in deliberate local lobbying at all levels as well as a process of continual scrutinizing that the organization is indeed able and suited to carry the voice of the community. A now famous method known as people first implementing method (P-FIM) makes for listening to the community, they vocalizing the need. 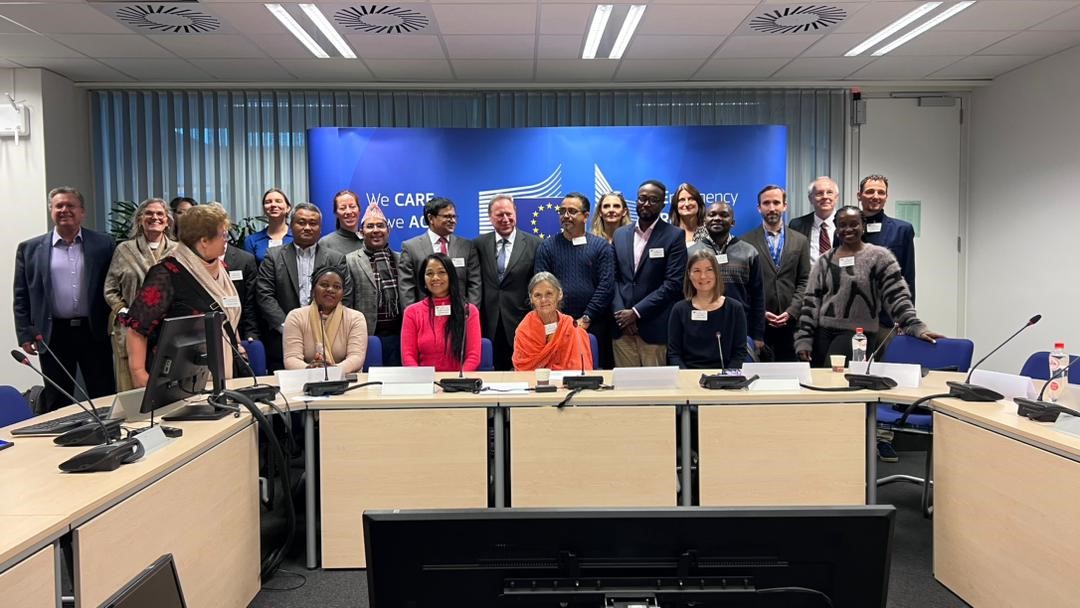