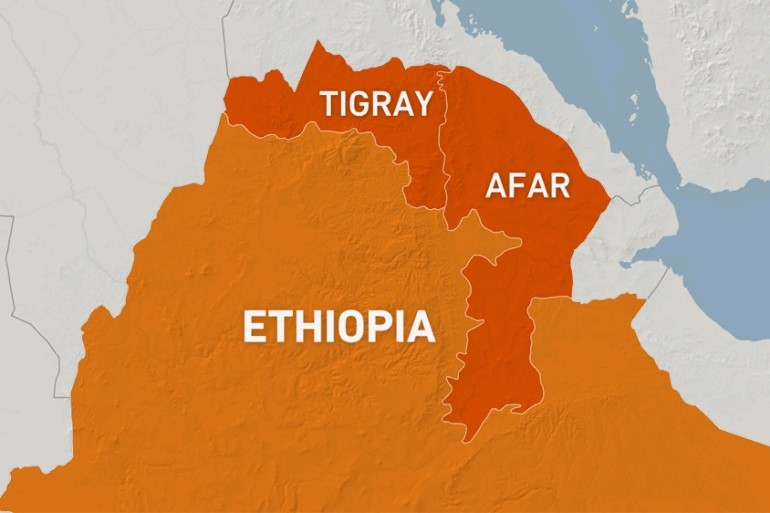 As of March 31st, the Afar people abided by their side of the truce to allow humanitarian convoys into Tigray travelling through Afar Region. Within two days of the first convoy getting in, fighting had resumed in Magaale, the Afar militia pushing TPLF fighters back from Bubbuyse, just 20 kilometers from where the majority of Magaale’s 35,000 displaced people are harboring in Dirma. Fighting in Konnaba is persistent with the TPLF controlling the entire district and jockeying to come back into Dallol through Dam’ale.

While the TPLF did withdraw from Erebti town around 20 kilometers from the border with Aba’ala district on the main road on April 12th, they have left behind mayhem of destruction: all shops systematically looted, government offices rendered unusable, private houses ripped apart, the school now totally unserviceable. While the clinic was raided of all possible supplies and equipment, the building still stands. The worse for the local people was they desecrated Islam by bringing the Koranic books out of the mosque and urinating on them. Erebti the last town Tigray – bound convoys pass through before reaching Aba’ala town where they cross into Tigray.

The remains of houses in Erebti 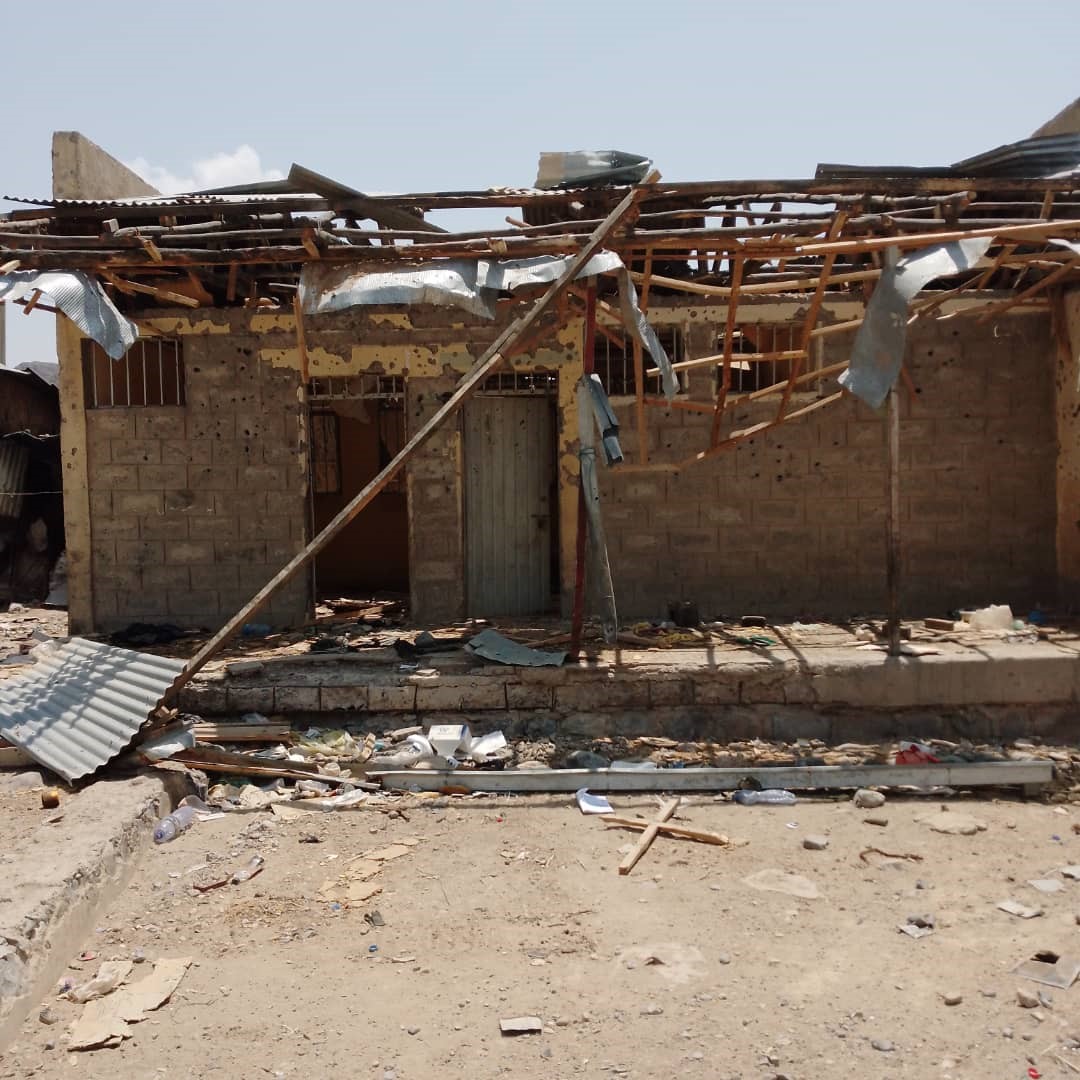 Books in the mosque turned upside down 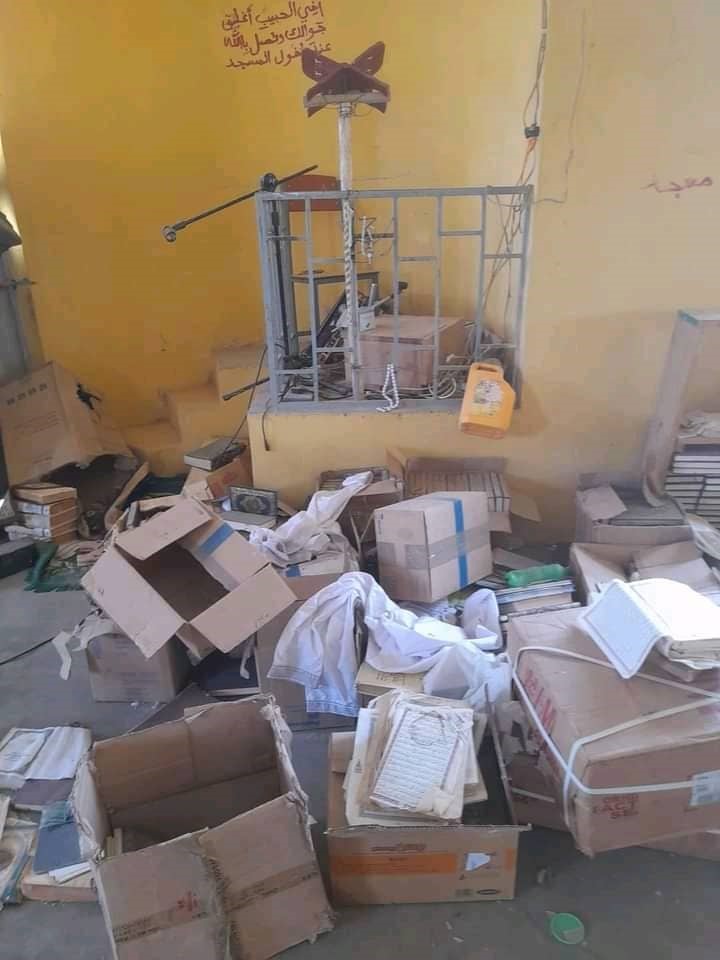 The water scheme in the town is in ruins and those who ventured to return, like other conflict – affected in Erebti are extremely hungry as well as desperately thirsty. There are no functional latrines in the town so this poses another disaster.

From working in the most highly remote areas to reach displaced people, APDA is aware of 9 kebeles/ sub-districts that are totally isolated; surrounded on all sides by TPLF forces. News of their imminent starvation is now surfacing. The two in Magaale are Tonsa and Faaro. In Barhale, close to Konnaba there are 4 cut-off kebeles: Kora’, Da’ar, Assgubi and Buure. In Aba’ala, Galalisso is isolated and in Konnaba, the people of Fehiim Af and Gindi, both sites in Balbal kebele are trapped unable to come out as displaced. For APDA, there is no possibility of reaching them with TPLF forces surrounding them. The organization’s appeal then would be that WFP reach them with their ability to work with both sides, rescuing them from seemingly inevitable demise.

News comes from the north by difficulty but today there is information that a refugee resident from the Eritrean refugee camp of Barhale was gang-raped in the town of Barhale occupied by the TPLF. It is said her legs so swollen that she is unable to stand. APDA is trying to get more details so she can be assisted.

Still in the 5 districts TPLF occupied for 5 months in 2021, unexploded ordnances litter the ground. In early April, 8 – year – old twins stumbled on such a devise taking them both to Dubte hospital with severe injuries. APDA has recorded 36 such incidents, of these 7 deaths.

Her brother has neck and head injuries 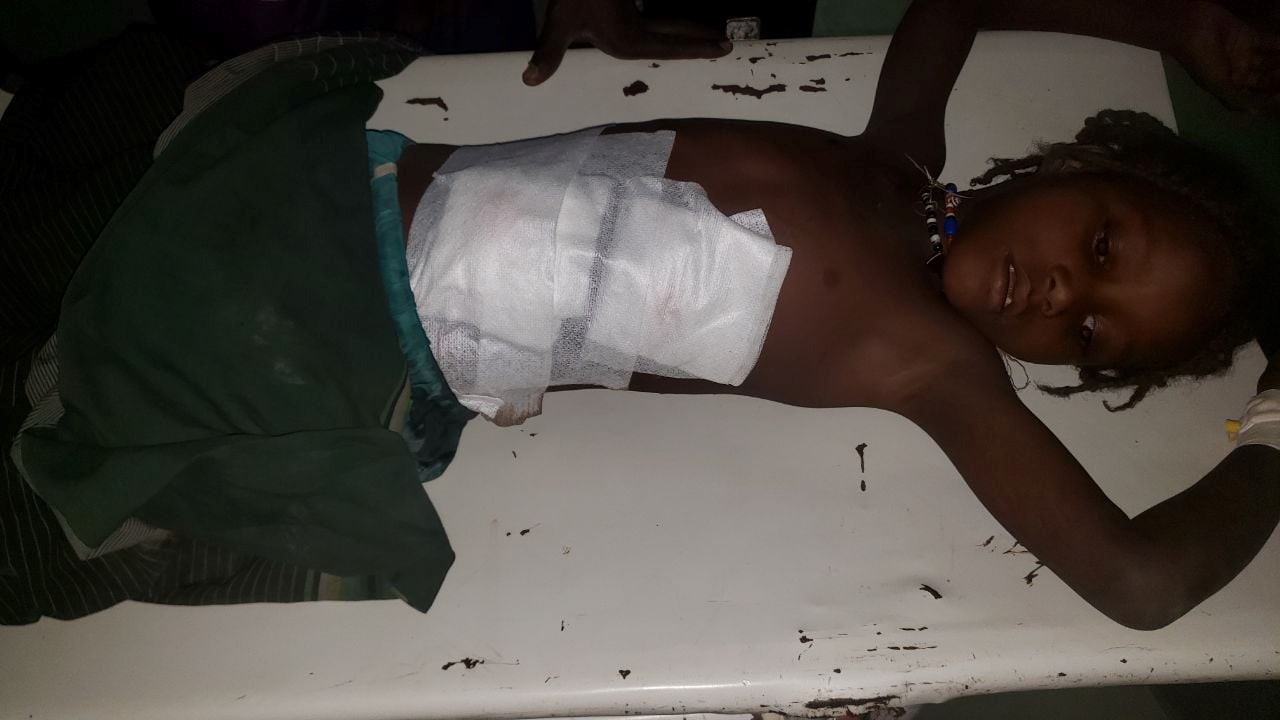 Throughout this crisis, APDA has tried to assist where other NGOs and even WFP/ government distribution does not reach. However, there are now around 45,000 displaced people in the government – established displacement camp on the outskirts of the small town of Guyah on the road to Afdeera and further 20 – odd thousand displaced people in the towns of Logya, Samara and Dubte. While those in Guyah do get some support, those in the 3 towns are unsupported and showing extra-ordinary malnutrition and despair.

This is now THE most critical need. The community is mid-way in Ramadan; the weather is extremely hot and and if they have accessed it, displaced people have only got WFP unground grain and cooking oil.

APDA through your support has delivered as follows:

To displaced in Dallol from Konnaba, Dallol and Barhale: 34.4 Metric tonnes (MT) of wheat flour; 12.33 MT of ground barley, 0.8 MT of sugar and 3,840 kgs of dates have been delivered with the heavy challenge of finding vehicles to actually go there. APDA’s health team on the ground distributed to the most severely affected. The need remains urgently outstanding and APDA plans to take another 30 MT of food immediately. There are upwards of 80,000 people displaced in 4 sites of Dallol. The start of malnutrition deaths has already been reported. These people are all living under trees and, being that the conflict is close to them, displacement is also constant. Thus APDA has given them read – to – eat food along with wheat flour. For most humanitarian organizations, Dallol is a security risk and therefore APDA needs to continue buying up such food for them.

To displaced in Harsuuma and Daboore in northern Afdeera from Barhale and Aba’ala: 132 MT of wheat flour; 13.2 MT of lentils; 4,400 liters of cooking oil and 2.2 MT of salt was distributed to 2,200 households supplying them for 1 month. These too are relatively hard to reach areas and being that there are well over 10,000 households in the vicinity, the organization plans to assist another 5,000 households similarly in the coming week.

To displaced in Erebti from Erebti, Aba’ala and Magaale: the plan is to send them immediate 20 MT of ready to eat food since they are probably again on the move having heard of the withdrawal of TPLF from the their administration town, Erebti. There are some extremely hungry pockets of people who to date have not accessed distribution sheltering well away from the main road. APDA had previously sent them supplementary food. Malnutrition, according to APDA health workers’ screening is extra-ordinary high, loss of livestock and a collapsed market for now 16 months contributing to this.

Displaced in Dirma and 3 other rural sites bordering Yallo from Magaale: aside from WFP’s unground wheat, APDA is the only organization supporting food needs of the most desperate people. Three elderly people died of hunger soon after a 7 – day marathon walk to Dirma in March. APDA has supported with 60 MT of food including wheat flour, supplementary food (Ethiopian famix); ground barley and dates. People struggle to grind the wheat grain they are giving walking 4 days to Yallo but many do not have pack animals.

Understanding the centuries – tried traditional housing of the Afar, APDA distributes traditionally – made mats to households of whom the armies have destroyed their homes by ripping off the mats, burning them or even deliberately jumping on them till they collapse. The Afar home is the woman’s and she builds the frame of thin, flexible branches and the mats are then tied in place. This, known as daboyta, is the traditional home of Afar nomads. To date through the generosity of many supporters and organizations, 1,752 homes have been rebuilt, the benefiting mother being restored in her home – dignity after the desecration of loosing her prided possession. This however is still only scratching the surface as well over 7,000 traditional homes were destroyed in the 2021 five – month conflict and clearly thousands more are now destroyed in the northern districts, particularly Magaale where TPLF burnt 1,080 houses in December 2021 alone. In Sifra in central western Afar where the TPLF stayed some 5 weeks, 4,730 houses were destroyed alone. With the heat now taking over the landscape, mosquito nets remain needed and sleeping mats. Some of the displaced are without cooking pots.

To date, APDA has 4 main health teams in the conflict zone: among the Magaale displaced around Dirma; in Erebti, In Afdeera and in Dallol among the Konnaba/ Dallol/ Barhale displacement. These teams go out on foot and provide monthly nutrition screening and treatment, basic treatment, awareness on disease prevention and maternal health care. Currently, while malnutrition has improved in Afdeera, it has shot up in Erebti and Dallol reports are also very worrying. In fact, for the children with complicated malnutrition, Dubte hospital is the only service aside from Afdeera clinic and mothers and weak children are overloading this service.

For the most part, this house-to-house health service is now the only possibility of displaced people getting health care. Now some 200 – odd mothers have delivered under a tree/ by the roadside. Currently, there are no ambulances to reach down to Dubte hospital some 700 kilometers from most of the northern districts, the journey anyway taking 8 to 12 hours since all health services are dysfunctional: looted and destroyed.

To date, the most concerning health issue among the displaced is malnutrition but fear of measles, whooping cough, pneumonia and diarrhea is high.

Now for all intentions, Afar Region looks to be joining southern and eastern Ethiopia/ Somalia in the massive drought that is occurring. Along with these areas, Afar Region had not had productive rain since 2019 main rains but for Afar, the annual main rains of July to September 2021 did break that cycle. However, there has been no rain since. The cries for help are that of thirst and animal weakness. Indeed, the people of Alaab in Bidu are now fearing the women and accompanying men who collect water will not return: the journey is a full 24 hours in temperatures now above 45 degrees…. And they try to fast for Ramadan… Alaab is crying out for a water truck and the people of northern Eli Da’ar equally. These Eritrean border areas are particularly dry having received far less of the 2021 main rains.

APDA is receiving several cries for help as malnourished animals succumb to various infectious diseases and die in numbers. While the veterinary team now has medications, the real need is animal feed or fodder since the pastures are utterly dried.

In all this, APDA has two long-shot solution – dreams:

These two solutions would take the danger out of much of the drought – shocks preventing the communities from disaster.

As has been said, the greatest crash for the Afar through this conflict crisis is the market, this is driving the entire society into food insecurity with all its awful consequences. APDA has been practicing its newly – devised strategy of providing food to the most needy and simultaneously providing in kind food start-up to local cooperatives that they provide food access locally at affordable prices. This is now lighting the fire of recovery and relief pulling away from the destiny of food dependence. This needs to gain even more traction as actually all conflict – affected districts have no market access and, especially with the northern Afar, since they are natural traders, it needs to happen now. Some having fled with their assets, these are melting away as they use what they have to survive rather than making local investment by trading.

The second great social tragedy the Afar face is that the education system for many is not functioning. There needs to be a fast injection of innovation and mobilization even as people sleep and eat under trees as displaced people. Informal ways of teaching need to be brought on board to avoid the sinking sense of hopelessness and all the anger and resentment this war has brought.

To complete, we are enjoying visitors since the past 7 weeks and again as mentioned before APDA is disabled if it is alone. Together much can happen to avert what could be years of tragic downturn. We are working to enliven our social media platform and may well open a Twitter handle soon!!

With drought – breaking rains, may PEACE come flying through the window!!!!! 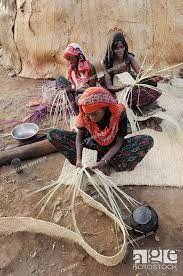