On receiving a number of donations toward our appeal to help the AFAR Pastoralist Development Association, Valerie Browning has sent a very comprehensive report analyzing to best way to help communities with food and water distribution. 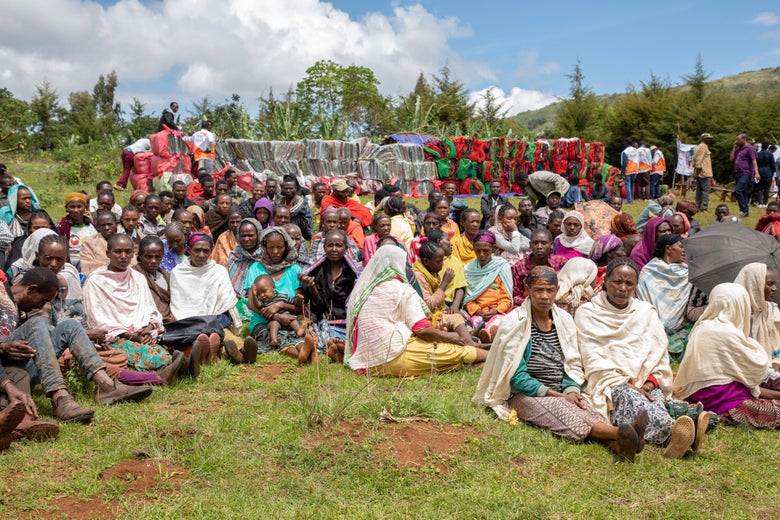 We have transferred the first lot of funds US$1,100. This will help with a few of the immediate needs, and we are continuing to raise funds, details below on how you can support this project:

People spoken to include:

After now 21 days of the conflict in Tigray, what is evident is that all visited districts were utterly dependent on Tigray for electricity, supplies, market, banking as well as being highly socially linked.

‘Aba’ala was the most northern district on the Tigray border visited and joins to Tigray at Quiha, a border town that leads onto the Mekele Airport and the road into Mekele. The district has 56,000 people (estimate) living in the town that acts as the northern Kilbat/ Zone 2 administration capital. These 56,000 urban and semi-urban people living in 8 kebeles and there are an additional 6 rural kebeles making up the entire district.

Magaale is a woreda of roughly 37,000 people adjoining to the southern border of ‘Aba’ala and connecting to Tigray through Mokkoni. This is a much more rural district where the main concern is that there is no market leaving people from the entire district unable to purchase food. They were marketing goats to Tigray through Mokkoni. Like ‘Aba’ala, they have no access to banks aside from now going far south to Kalwaan in Guulina travelling through Yallo.

Again, electrical power came from Tigray as well as the shortest route to refer a delivering mother in problem.

Ten days previous to the visit, TPLF soldiers had come into the closest border kebele of Tonsa and raided 57 goats that the local people were trying to market. Four local men including the 3rd head of the kebele tried to resist and they were taken away captured to Tigray. Two houses were burnt in the incident from some sort of firearm.

The government of Magaale now strongly fears worsening malnutrition. They already have upwards of 40% of their under 5 year olds with moderate malnutrition but with no goat market, even those who have herds will suffer similarly. Their plea to APDA was to find a way to open the goat market.

There is flour in the district just brought up from Nazareth close to Addis Ababa but this sells at 1,500 ETB/ 50 kilograms (normal price around 600 ETB). If they can get a sale for a goat, it sells at around 500 ETB when it should reach up to 3,000 ETB.

Locusts have devastated almost all grazing leaving the animals in a critical condition if vegetation – rejuvenating rain does not fall till around April.

Yallo adjoins to Magaale going south on the Tigray border. The district is home to the largest market in Afar Region connecting to Alamatta, Gubgudo, Balla and Chercher.

There the news is much more drastic as now 11 days ago, the government launched a 3 – day fight for the border town of Chercher, the town the community has the greatest link to. Apparently the Tigray army had a military base adjoining the town. Rockets were fired from the periphery of Yallo town literally rocking the houses and leaving the 16,000 odd occupants to scatter toward Kalwaan, some 15 kilometers east of Yallo.

With the Tigray army in the town of Chercher and surrounding villages, there was a horrific massacre since apparently this army had use the tactic to hang on to the civilians. Two days after the battle, Afar men went to bury the dead and report burying scores of people among them women, children, elderly and blind., the people who could not flee. Most of the houses are burnt.

310 people did reach Yallo town and were housed in the government school for 6 days, fed and given sleeping mats. Finally, they were trucked back to the border when it was clear the area was under government forces. A further 45 people who had fled from Chercher, sheltering in the border kebele of Gidda’eela were fed, food taken by camel. Again, there is a further number of people in the Gorrisso Riverbed, 7 hours walk from Yallo (no road access). Afar have gone there and given them goats to eat.

The Zone administration town of Kalwaan, home to the main local hospital treated almost 1,000 wounded soldiers, government supplies and medical workers having been brought up from as far away as Addis Ababa. Two injured civilians were treated: one 2 year old and a man. The medical director described wounds as horrific since very high powered weaponry was deployed. These people have been referred on for further treatment through Woldiya hospital.

The largest animal market in Afar Region in Yallo is now stopped; there is no electricity – the supply they depended on from Chercher is burnt in fighting. The district head described 24,000 Afar pastoralists in need of immediate food assistance since they are unable to sell goats, locusts have destroyed their grazing pasture and there is already remarkable malnutrition in the district.

It needs to be noted that ADDITIONAL perspective is occurring as this is being written with the attack on Mekele taking place (November 26th), the government news reporting 80,000 people have left the town of Mekele and more can be expected to do so. These people are likely to flee into Afar Region through Quiha. ‘Aba’ala will need immediate support of water trucking, food and shelter. Afdeera and Soddonta in Bidu are possible sources of trucking water.

APDA will do what it can to turn around assistance to the most needy situation and is trying to work through the market problem of finding other sources of buyers. This however needs logistics and capital funding.